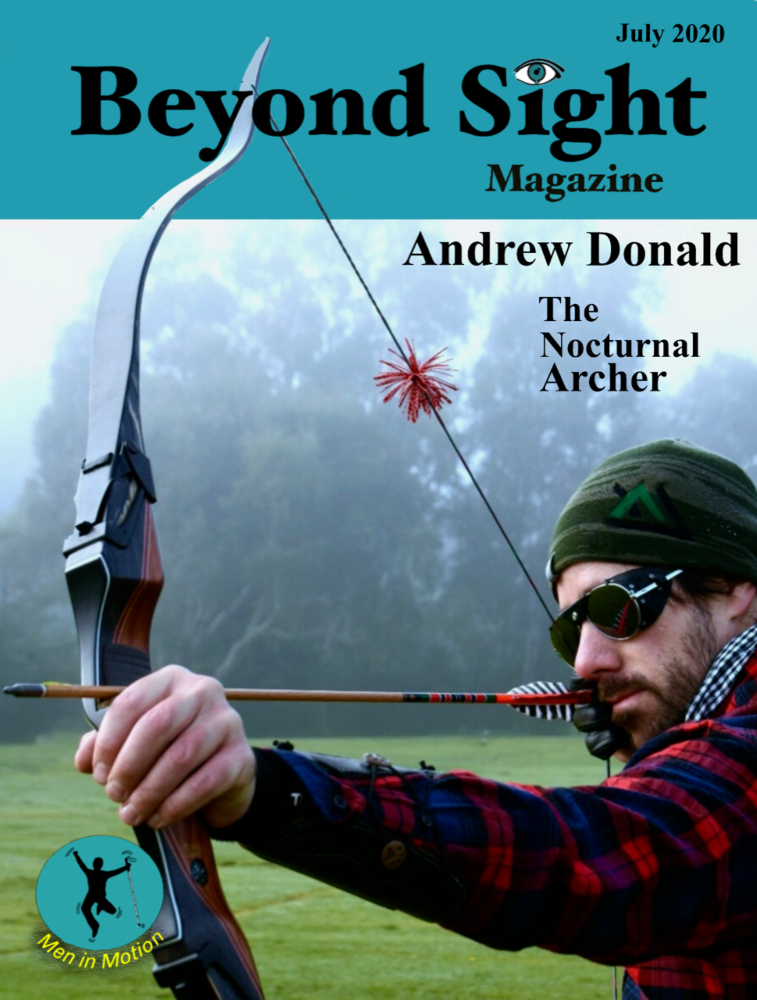 Bold Blind Beauty is an empowering online community that connects blind and sighted people while eradicating misconceptions about blindness and sight loss. We’ve found that when we are open to the idea of limitless possibilities our preconceived notions dissipate. The people we feature aren’t extraordinary because they are living with sight loss, however, they’ve worked hard to adapt to a new way of living. Today, from Down Under you’ll meet via video, our July Man In Motion, Andrew Donald, known as “Nocturnal Archer.” We’ve also provided a transcript of the video below. Enjoy!

Good day. I’m Andrew Donald. I’m from Melbourne and I’ve been a professional musician and music teacher since I left school, and I’m currently studying my master’s of education at Victoria University. I’m 36 years old and I’m legally blind. I’ve been involved in martial arts and music since I was about five years old, and more recently I’ve taken up traditional archery. That’s what I’d like to talk to you today about, my journey into archery as a vision-impaired person, and really more broadly about how accessible archery is to really anyone.

My vision impairment is called rod monochromatism. This means that I see only with my rod cells and have no cone cell function. This makes me extremely sensitive to light. I have quite low visual acuity and I’m totally colorblind. I do however see quite well in the dark and this has formed a major way that I’ve adapted archery to work for me. Archery is an incredibly diverse art form. There are many different styles from all around the world, and there are so many different ways to enjoy archery. It is primarily extremely fun. It is extremely challenging and very personally rewarding.

You can make a lot of cool stuff in archery. I make my own arrows. I fletch them and paint them. You can make your own bowstrings. You can even make your own bows, which is something that I’ve really been looking forward to getting into. But overall, archery is an extremely technical discipline and it requires a lot of practice, and that’s part of the appeal for me. It’s very similar to music in that way. I’ve found that archery has been a natural extension of my experience with martial arts, but it’s also surprisingly been an extension of my experience as a musician as well.

The style of shooting that I practice is called instinctive shooting. This is a style that doesn’t use a bow sight or any other visual mechanism to aim the arrow. Rather, you look at what you want to hit and then you use your physical technique and your form to align your body properly so that you can send an arrow to that target. It’s very much like kicking a soccer ball. You can’t aim a soccer ball. You simply have to look where you want it to go and then put your body in the right position to send that ball where you wanted it to go.

It’s also strangely like singing and playing a musical instrument. If you can play the piano without looking at the keys, you’re instinctively aware of where each key is. In singing, even more so. You can’t see a note or a key you have to play in order to produce the note you want so you have to trust your instincts and your many hours of practice, that when you go to sing that note, it’s going to come out the way you want it.

Another way I’ve found instinctive archery is very linked to experiences as a vision-impaired person is navigating a familiar space as a vision-impaired person. If you navigate a familiar space without using your vision as a primary sense, then you are instinctively aware of your surroundings and where you are relative to those surroundings, and that’s really at the essence of instinctive archery.

Essentially, you’re using your sense of touch, your kinesthetic awareness to align your body relative to the target. I still need to see my target in order to hit it, but I don’t need to see it that clearly. In fact, I can shoot more accurately than I can see, if that makes sense. This is because archery is extremely technical and your form and technique play such a major part in making your arrow go where you want. That sight is really secondary to that, in my opinion, and especially shooting traditional archery from a bow hunting perspective, the distances that we’re shooting really is not that long. In bowhunting, you would never attempt a shot beyond 20 meters, in traditional bowhunting.

When we practice, it’s always fun to push the distance out to 30, 40, 50 meters, but it’s still very satisfying trying to shoot five, 10 meters, and this is still quite a challenge. So that’s another way that traditional archery and instinctive shooting have worked well for me as a vision-impaired person.

There are indoor tournaments and outdoor tournaments. There are 3D tournaments that mimic bow hunting, and there’s of course bow hunting, which is an incredible way to get in touch with nature, and being in a natural environment with my bow and arrow is one of my all-time favorite pastimes. Perhaps the most common reason people get into archery is that it’s incredibly fun. It’s super addictive and it’s a great way to meet new people. It can be a very social activity, but it can also be a tremendous solitary, meditative pursuit as well, and I love that side of archery.

Archery is also incredibly safe. By far, the most dangerous part of archery is the removing of the arrow from the target as opposed to shooting the bow. Yeah, archery is a very safe sport and as a vision-impaired person practicing archery, this is of course very important to me. If you haven’t thought about taking up archery as a blind or vision impaired person, I’d seriously consider it because it’s far more accessible than you might think. There are so many different ways to involve yourself in archery and it can be an incredibly rewarding thing to practice.

So I’d love to see more blind and vision-impaired people practicing archery. If you are interested in archery and my story more, you can find me on Instagram under Nocturnal Archer. Instagram has been a tremendous platform to connect with other traditional archers from all around the world and I’d have to recommend it. It’s been a very positive community. If you’re interested, there are lots of experienced archers out there to help you get into the art of archery. So, yes, thank you so much for listening and I hope this might have inspired you to look into archery. Take care. 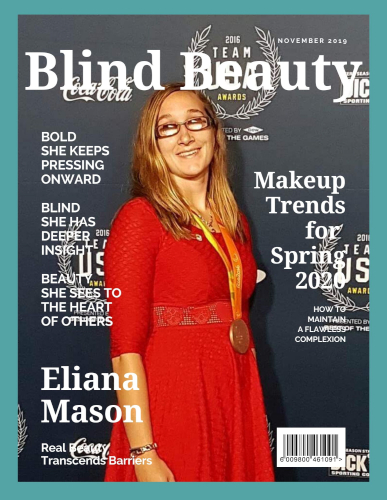 “Disability does not mean inability”

Since my relationship with sports is practically non-existent, I’m sadly out of the loop when it comes to any sports-related activities. However, I greatly admire women—and particularly women with disabilities—who are kicking @$$! I’m especially thrilled each time I have the opportunity to present one of these women on Bold Blind Beauty.

Today, I’m excited to introduce you to Eliana Mason, a young woman I’ve only recently met. When I saw her flip a 400-pound tire, I thought “I’ve got to meet this lady.” Like many women featured here, Eliana’s passion to change how people with disabilities are viewed is palpable. She’s a phenomenal woman who already is and will continue to accomplish amazing things in her life.

When I was growing up people always used the word “inspiration” to describe my accomplishments. This word frustrates me because you shouldn’t find it inspiring that someone with a visual impairment graduated high school, has friends, has a job, or plays sports. This should be the norm.

If you treat individuals with disabilities differently and as if they are incapable, then that is how they are going to view themselves and act. It is important we empower individuals with disabilities by not seeing them as ‘other’ or treating them differently but simply acknowledging that everyone faces personal struggles and overcomes them in their own ways. We all have challenges in our lives, just being visually impaired means everyone you meet knows what your challenges and struggles are.

We need both sighted, blind and visually impaired individuals alike to work together to change how blindness is understood and viewed. Don’t tell me I am your inspiration for doing something that is the norm. It is okay to tell someone they are inspiring, but it should be for something that is worth that acknowledgment.

I am an athlete and play on the Paralympic National Women’s Goalball Team representing Team USA. I found my identity and confidence through sports and wouldn’t be who I am today without adaptive sports.

Most people have never heard of the Paralympics, they are parallel to the Olympic Games, except they are for athletes with any type of physical disability. Goalball is a sport geared specifically to blind athletes and it has allowed me to excel as an athlete, to train, and compete at an elite level without my vision being a limitation. I am currently training full-time to compete in the Tokyo 2020 Paralympic Games next year in the hopes of bringing home a gold medal.

Being an athlete empowers me and makes me feel strong and beautiful. Strength is beauty to me and working hard to reach a goal is what pushes me every day to be better than I was yesterday. When I am a Paralympic gold medalist, then you can tell me I am an inspiration, after I’ve accomplished something that is inspiring and extraordinary. Until then, recognize that I am no different than you, and that I am capable and able to accomplish anything I set my mind to, just like you.