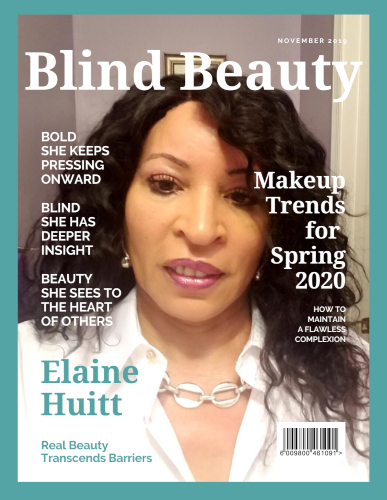 When I interviewed Elaine Huitt for her Women On The Move piece I was moved by her entire story. However, the above personal quote that she shared at the end of the interview was a particularly powerful statement.

As a society, we are so consumed with how things are presented, many times we miss more meaningful messages. Pretty packaging, bells, and whistles can be a distraction for what really lies beneath. Conversely, packaging without the glitter and glam might appear ordinary until you unpack what’s wrapped inside.

Elaine, like many of us who live with disabilities, overcompensated and worked extremely hard to keep up in school and on the job. She did whatever she had to do to be successful which meant developing creative workarounds.

Maybe one of the reasons our planet is so diverse is we all bring something unique to our world. Together we are like a beautifully designed masterpiece that was meant to be as it is.

Despite everything working against her, Elaine was able to move up the ranks and become a huge success. In her current role, she helps youth understand that lack of physical sight has little to no impact on their inner vision. So many more just like her are waiting to make their mark, the question is, will we give them a chance?

Featured image – A headshot of Elaine wearing a crisp white shirt paired with a silver statement necklace. She has wavy dark hair, with on-point makeup that includes pink lip color. 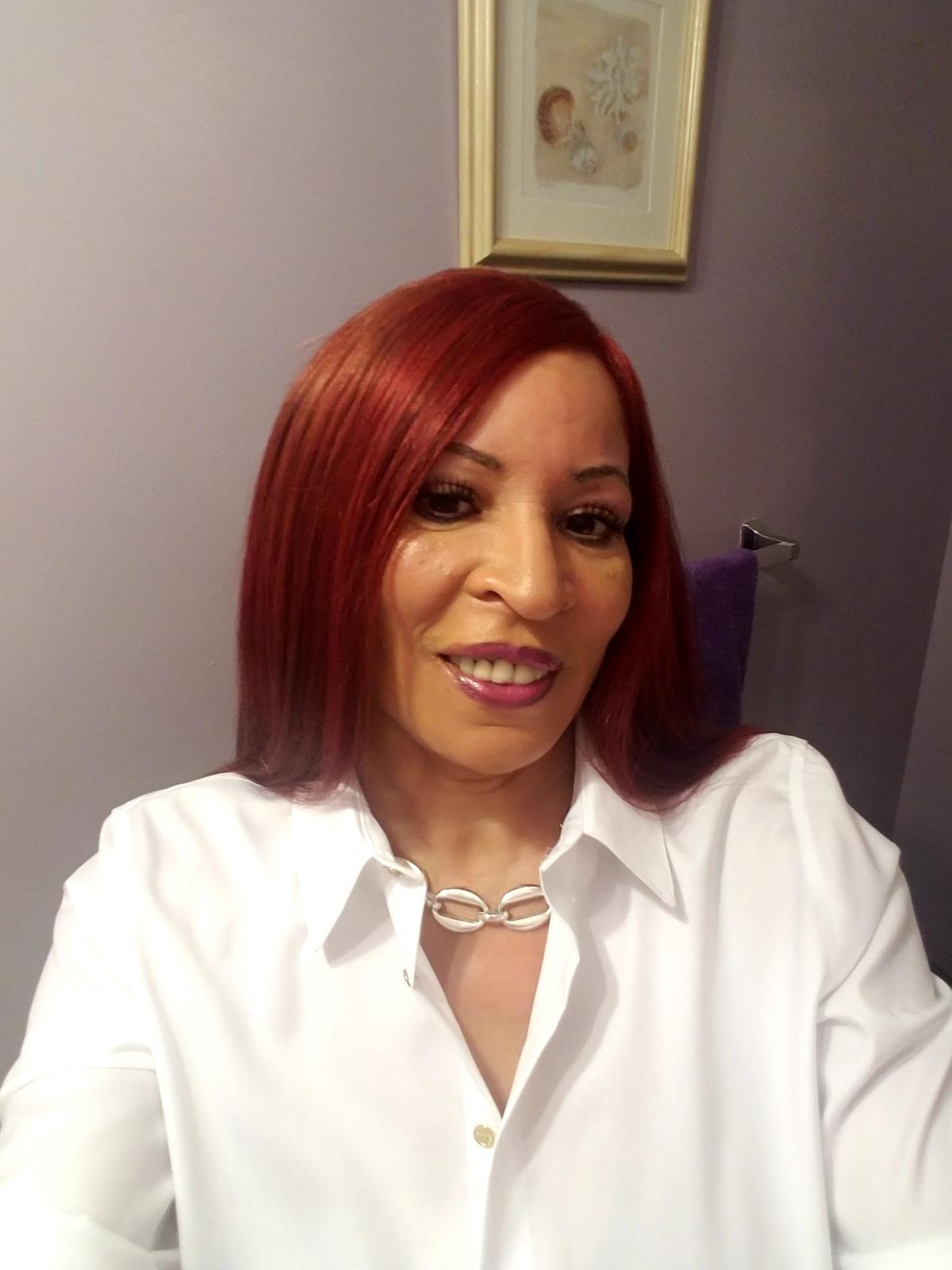 What are the odds that two blind women would run into one another at Dallas Fort Worth International Airport (DFW)? I’m sure a statistician would know the answer but this is beside the point because, This Facility. Is. Massive!!

“Do you know the new departure time for the Wichita flight”, she asked? I told her I wasn’t sure as I just relocated to this new gate. Then ‘poof’ she was gone! My friends met me and together we flew to Wichita for a conference where we’d bunk in a university dorm suite.

The conference, for blind and visually impaired youth from across the country, promised to be a jam-packed week of activities. It was at the next evening’s kick-off event where I would formally meet Elaine Huitt. When she came over to our table I said: “weren’t you at DFW?” We laughed when we realized not only were we in the same airport unknowingly we were on the same flight headed to the same conference. Like so many of the women featured here on Bold Blind Beauty, Elaine has a story. It’s my pleasure to introduce you to today’s Woman On The Move, Elaine Huitt.

Growing Up With A Hidden Disability

As a poised Sr. Vocational Rehabilitation Counselor, no one would ever guess that Elaine Huitt is 60 and blind. A beautiful lady, who walks confidently, without a white cane I might add, said even her doctors don’t understand how she does it. Because of the severity of her sight, it’s not uncommon for Elaine’s doctors to ask her how she walked in their offices.

Elaine and her brother were both born with Idiopathic Congenital Nystagmus. While she wasn’t diagnosed until after high school graduation, Elaine began wearing eyeglasses at 11 months of age. She explains that her condition is a blockage of the pathway from the eyes to the brain.

When Elaine was growing up it was taboo in her household to talk about her and her brother’s visual impairment. It’s partly because of this that Elaine and her brother didn’t receive accommodations in their mainstream school to help them succeed. Since her sight was so poor, and her teachers weren’t aware of the issue, Elaine fell through the cracks at school. Were it not for the help of one astute teacher, Mr. Frederick, she wouldn’t have been able to glide through school. As unlikely as it was, she managed to graduate high school while never having any reasonable accommodations. Her brother wasn’t as fortunate and didn’t finish high school because he was so ashamed of his sight loss. He was, however, able to find employment as kitchen staff at the Department of Education and he’s been there for 36 years.

The Burden Of Shame

Right after graduating high school Elaine began looking for work. Since her condition causes her eyes to constantly move she struggled at each interview. Unable to look the interviewer in the eye was problematic as it was assumed Elaine was on drugs or medication. Therefore, as a direct result of her eyesight, she had great difficulty finding employment and would go home feeling discouraged.

Elaine went to college briefly then dropped out because she didn’t know about adaptations that were available. When a person carries a secret disability it complicates getting the required assistance. Sadly, this scenario Elaine faced is not unique. All too often people with hidden and (some not so hidden) disabilities aren’t aware of the tools and resources that are available to help them. Even so, many people in these situations develop strong coping mechanisms as workarounds, such is the case with Elaine. Memorization was the skill Elaine relied upon to get her through and it worked!

Eventually, Elaine got married, had two children, and went back to college, however, she wouldn’t even tell her exhusband that she couldn’t see. Shame, embarrassment, and perhaps a little pride prevented her from sharing her secret. What’s even more astonishing is how she kept this secret from her children while they were growing up. I can’t imagine how she must have felt when she couldn’t ‘see’ her daughter’s dance recitals or her son’s football plays. Her children became the reason why Elaine would slowly divulge her secret with her husband. Oddly enough, her husband was her major supporter and also a great source of inspiration for her.

Graduating college with a BA in Human Services and an MS in Public Administration wasn’t easy but Elaine pulled it off. Keeping her secret was even more difficult, yet there were people in her corner whom she could trust. For three years, one good friend would take notes and made copies for Elaine for studying.

On the work front, since Elaine was so good at memorizing everything; from her environment to the company manuals, she progressed. While it may have looked easy to her peers, what they didn’t know was the incredible amount of behind the scenes effort it took for her to do her job.

Because of her sheer determination and grit, Elaine would ultimately become a supervisor then move up into management. Of course, promotions like these meant more challenges as she had more responsibilities. Elaine spent 30 years of service in the Department of Social Services then it was time for her to move on.

Part of Elaine’s moving on process included divorcing her husband then relocating to Delaware. After her divorce and subsequent remarriage, life was very good as Elaine’s new spouse became her greatest champion. The downside was once again she began seeking employment opportunities and applied for 150 positions. Once again her eyesight became the barrier where she was turned away from each job she applied for.

As I listened to her share how she overcame so many obstacles I was stunned when she told me it was only in 2016 help arrived. This help, in the form of a Vision Service Coordinator, told her to stop being ashamed. This counselor recommended that she apply for a particular job. After applying for so many jobs it plays with your psyche so Elaine was surprised to get called back for a second interview. Midway through the interview, Elaine told them the questions they were asking weren’t giving an accurate portrayal of her story. Then she explained who she is and what she was about and asked them to give her a chance to work with them. This bold move, being her authentic self, got her the job.

Today, Elaine loves her job as a counselor and is helping her students take advantage of many opportunities. By the way, the one thing I neglected to mention was her reason for being at the conference. She served as a chaperone for a group of teenage B&VI students who participated in the conference. And the quote at the beginning is something Elaine developed and she shares it with her students to inspire them.

I’ll leave you with a motto Elaine adopted: