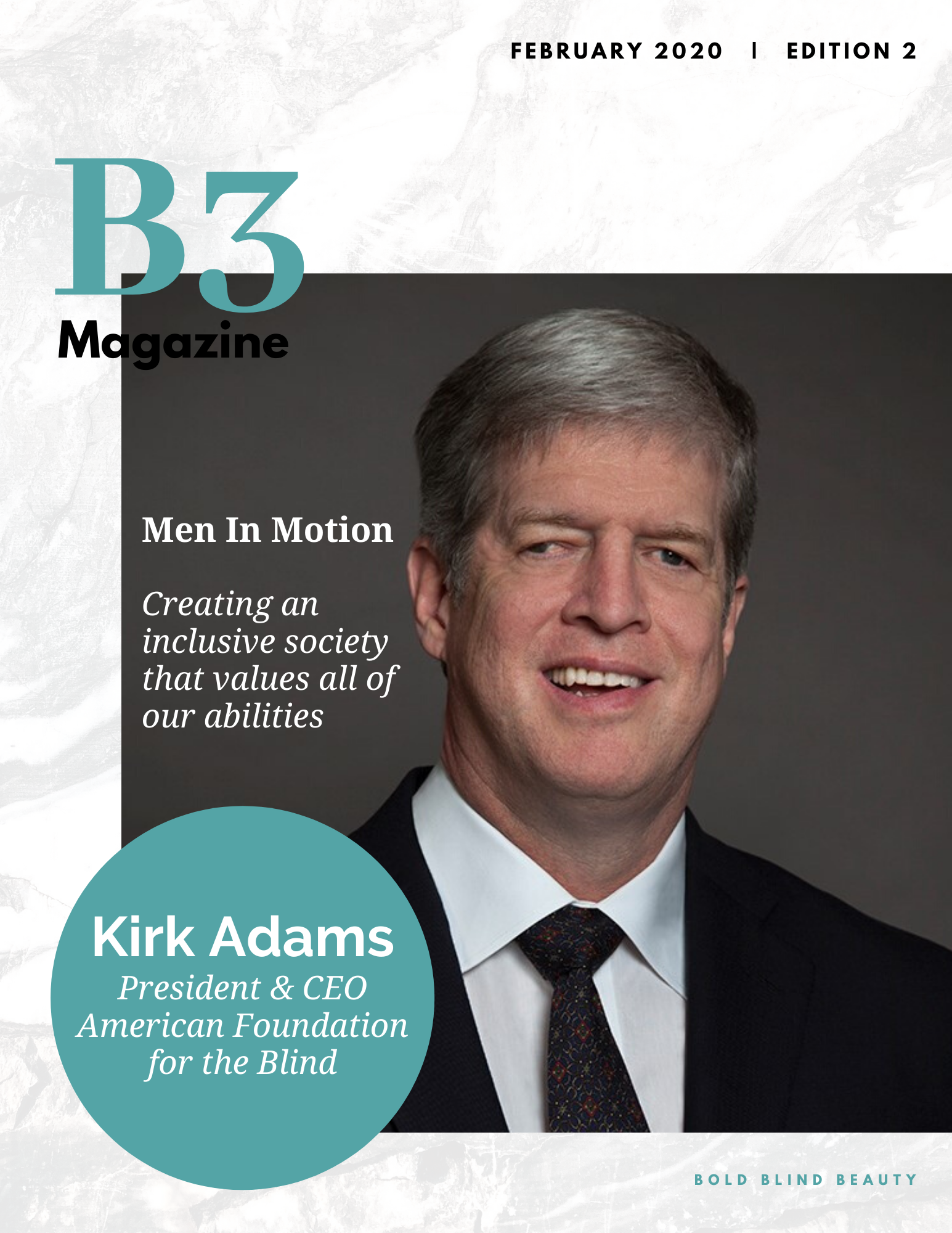 You know how they say “the only certainty is uncertainty?” Well, since starting this website uncertainty has become synonymous with Bold Blind Beauty and I couldn’t be happier. I’ve talked about some of these changes in Seeing Differently A Message Of Hope For 2020 and Bold Blind Beauty Reveals. What I didn’t expect was help from some of the most amazing people including:

In addition to the folks mentioned, my right-hand person (Nasreen Bhutta), helped to create our advisory board to guide the direction of Bold Blind Beauty. At Catherine’s suggestion, we redesigned Blind Beauty to become B3 Magazine which will host our main features and more. We’re not sure how all of this is going to work but we are so excited to try this experiment.

Obviously, it is going to take us some time to restructure the site to match our vision and we ask for your patience while things are moving about. Okay, enough about the site, I’m thrilled to introduce you to today’s “Man in Motion” and our first B3 Magazine feature Kirk Adams.

Really, what’s next for me and for AFB is to change systems. To eliminate barriers, to create opportunities, to understand where we can focus our resources, leverage our relationships, our expertise, our history, to level the playing field for people who are blind. To create that world of no limits

Kirk Adams, President, and CEO of the American Foundation for the Blind (AFB) is the first person to appear on the cover of B3 Magazine. It wasn’t that long ago that I met Kirk through my friend Melody Goodspeed. In sharing with Melody our Men in Motion series she immediately offered to invite Kirk to participate. A call was arranged and the next thing I knew I was working with some talented people who work for AFB to complete this project. Following is a video and below that is the transcript for those who prefer reading. Kirk, thank you very much for letting Bold Blind Beauty share your story. ~Steph

Hi, this is Kirk Adams. I am president and CEO of the American Foundation for the Blind. It is truly a privilege to get to talk today to the Bold Blind Beauty community, and thank you, Steph McCoy, for reaching out to me. I’m honored to know you and really appreciate what you’re doing.

I was asked to tell a little bit about myself. I’m a totally blind person, born as a sighted person. My retinas detached when I was five years old. I was in kindergarten, and in that point in time blind kids didn’t go to school with their brothers and sisters and neighbors, you were going to a state residential school. I attended the Oregon State School for the Blind for first, second and third grades. I learned how to read and write braille, and travel with a white cane, and type on a typewriter, and we spent a lot of time with outdoor experiences, a lot of time on the Oregon coast, hiking in the mountains.

I remember cutting wood with a crosscut saw, riding horses, though really learning to feel comfortable as a blind person moving through spaces and different environments. I was taught to love myself and body and what it could do. And when my blindness skills were to the level where I could participate in public school, I began public school in fourth grade.

[It was] a very different experience – a lot of limits placed on me, mostly through misconceptions of blindness. I heard “No,” “That won’t work,” I heard “You can’t do that,” “That’s too dangerous.” I was the only blind kid in my school after leaving the school for the blind. It was really a sink-or-swim situation. It was before the Individuals with Disability Education Act, so sometimes I got my textbooks in Braille, sometimes I didn’t. Sometimes I had a different edition than the other kids.

I was not allowed to participate in P.E. [physical education]. Again, people thought that would be too dangerous. I learned a lot through that experience. I developed a lot of resilience, grit, and perseverance. It was also isolating and difficult – especially in the teen years. I grew up in little rural towns and my classmates all got driver’s licenses when they turned 16, and all got jobs, and I got neither. And there was no public transportation.

It was a mixed bag. I was fortunate enough to receive an academic scholarship to go to college, a small college called Whitman College in Walla Walla, Washington. The first week there I met a brilliant, gorgeous young lady and we’ve been married now 34 years and have two find children who are active adults, contributing to their communities.

I was applying to finance jobs. I would get a phone interview, and it would go really well. Then I would walk in for the in-person interview, with my white cane and my slate and stylus and Braille… and things did not go well. I was not offered positions – I was often told I was the second candidate.

I started casting that employment net wider and wider and wider. I applied for a sales position with a securities firm, a small family-owned business that underwrote tax-free municipal bonds in the Puget Sound area. The sales manger [there] had also gone to Whitman College and was also an Econ major. We’d had some of the same professors and he called them, and they vouched for my competencies, and I was offered a position selling tax-free municipal bonds over the phone, which I did for ten years. I earned enough to do those things I wanted to do – get married, buy a house, start our family.

After doing that for about ten years, I really came to the point where I wanted to contribute to my community in a different way. I pivoted into the non-profit sector, became a development officer for the Seattle Public Library Foundation, raising money for the statewide Talking Book and Braille Library.

I knew I’d found my home in the nonprofit world, so I went back to school and got a master’s degree in not for profit leadership from Seattle University. I had increasingly more responsibility as I moved through different organizations, and I was fortunate enough to be hired by the Lighthouse for the Blind of Seattle, where I became CEO. I served in that position for eight years, grew the organization nicely, increased the numbers of blind and deaf-blind people we employed, increased wages, increased locations, had a very great experience.

I’ve gone 19 years in a row now, I was asked to join the program committee for AFB, then the board of trustees, and then when my predecessor announced his retirement, I put my name forward. There was a very rigorous national search, and I am blessed to be given the opportunity to lead AFB into its second century – our centennial next year in 2021.

Thinking about the people who had the most influence on my life, I think I’ll take them in order, there’s three people who come to mind. One of them is my grandmother – my mom’s mom. Her name was Bessy Rose Luark, and she grew up in very rural Washington state. Her family was involved in the logging and timber industry. She was a Rosie the Riveter during World War Two, she worked on Boeing aircraft. She was a serial entrepreneur, she owned a boarding house, she owned a nursing home, she started a greenhouse to do wholesale sales of flowers to the florists, she went back to school and got a license for practical nursing certificate in her 50s.

She was just an amazing person. When my retinas detached when I was five and I became totally blind she treated me just like she treated all of her other grandkids. She would adapt crafts projects for me so they could be tactile. Just an amazing doer, a “no limits” type of person. She did not allow society to put any type of limits on her, she lived her life fully. She passed away when our son was three years old, so he got to meet her. I think about her a lot.

The second person would be a lady named Mrs. Summers, she was my teacher at the Oregon State School for the Blind. She gave me the gift of literacy. She taught me how to read Braille. She was a tough task master. She made me practice the techniques and the hand sweeping gestures of a good braille reader for hours and hours and hours before she would teach me the braille code. I’d ask her, “Can I learn to read now?” and she’d say, “No, you’re not ready yet!”

When I finally was given that gift, I just became a voracious reader. Reading carried me through many a difficult time, especially in my adolescence.

The third person would be my wife, Ros. We met the first week of school (college), when we were 18 and now, we’ve been married 34 years. She has the biggest heart of anyone I know, the most grace.

Those are three people – coincidentally, all female! They were the three people that came to mind when I think about who had the most influence on me.

As a blind parent, what were some of the challenges you experienced?

Parenting two children as a totally blind person, a couple things come to mind. Really the main challenge that I can think of was around transportation. We had two very active kids, both involved in music – one’s a cellist, ones a harpist. They were involved in sports.

For the typical sighted parent who can drive, can support those activities in a way that a blind parent can’t. Although, public transportation was our friend. The kids had metro bus passes early on. I had an account with a taxi company that would bill us monthly, and both kids had access to the taxi account. Obviously, this was before Uber and Lyft, which I think could make a world of difference now.

I would say the flipside, though, is that my kids have a sense of empathy and fairness that is exemplary, and I think that part of that is they were raised by one parent with a significant disability. My wife is African American so we’re an interracial family as well, so our kids have some really unique experiences and viewpoints. I think their lives are richer because of my blindness, and I think they would say the same.

What’s next for AFB and Kirk Adams?

Really, what’s next for me and for AFB is to change systems. To eliminate barriers, to create opportunities, to understand where we can focus our resources, leverage our relationships, our expertise, our history, to level the playing field for people who are blind. To create that world of no limits.

The B3 Magazine cover has a gray/white marbled background. The date & edition number are in the upper right corner in black ink. Kirk’s photo is aligned on the right margin with the background appearing on the top, bottom and left margin. In the headshot, Kirk is very distinguished with silver hair and dressed in a dark business suit with a dark print tie. “B3” is in large teal text and a teal-colored circle with Kirk’s name and title are in white text. There is a 4-line of white text on the image that reads “creating an inclusive society that values all of our abilities”

Like Loading...
Categories: B3 Magazine, Men In Motion
Tags: AFB, American Foundation for the Blind, Kirk Adams, Men In Motion
Looking for something on the blog? Use this search.
Visitors
Subscribe To Bold Blind Beauty
Policies & Disclosures
Recent Posts
Archives
Facebook Page