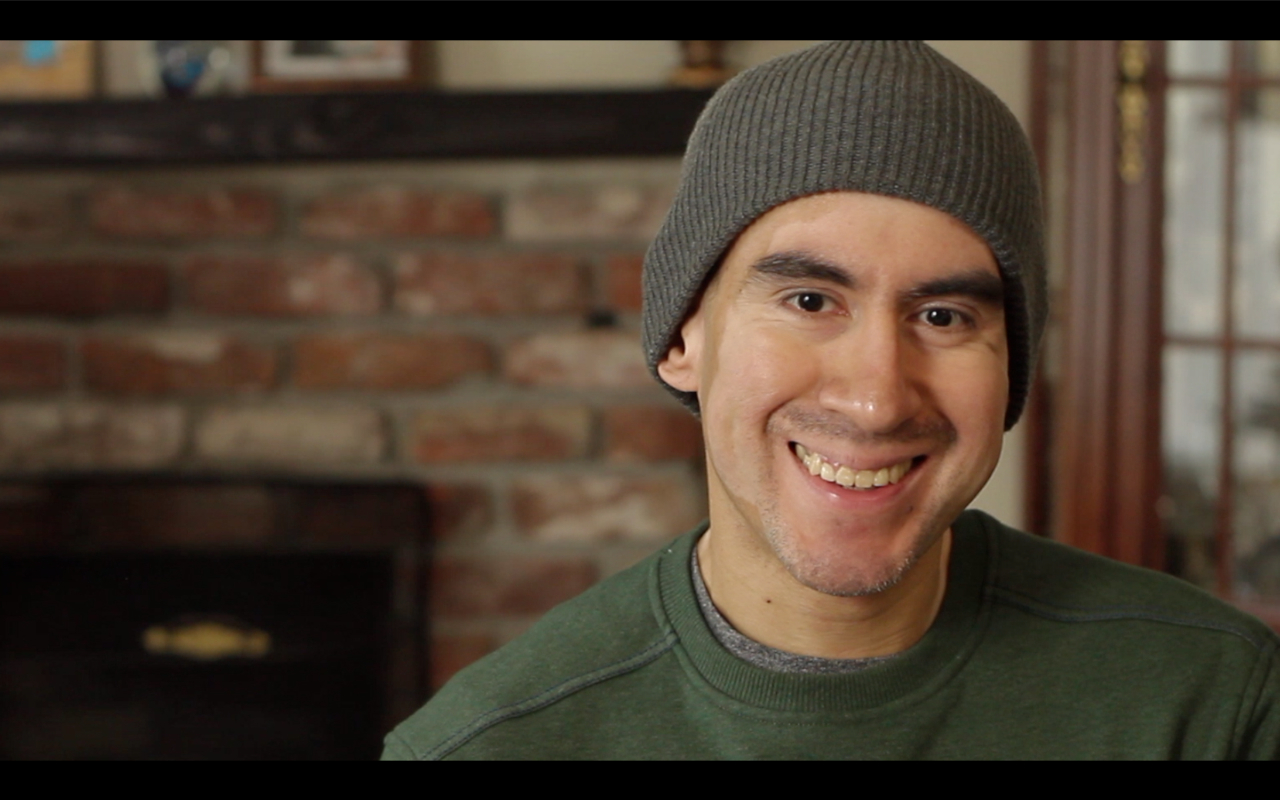 On the first Monday of every month in 2020, you will meet some amazing blind & visually impaired male influencers. For January’s “Men In Motion” Bold Blind Beauty is thrilled to introduce you to Filmmaker Juan Alcazar.

Juan is the talented creator of the YouTube Channel JC5 Productions and is also a valued member of our CAPTIVATING! team. From 1 minute short films to dramatic shorts, collabs, vision impairment, and disability awareness, Juan has a varied collection of video content.

In September of 2018, I made a comment on an Instagram post of Juan’s that led me to view his video “A Second Chance.” The storyline in this poignant video tugged my heartstrings because the subject matter is universally relevant to all of us at some point in our lives. Questioning, doubting, and underestimating our value can leave us feeling like what we do doesn’t matter. I think Juan beautifully captured the feelings of helplessness and hopelessness experienced when we make comparisons. Many creatives, who also happen to be sensitive, are especially vulnerable because we feel so deeply.

It took Juan some time to find his “why” as he didn’t want to be known as “the blind filmmaker.” While he doesn’t let his sight loss define who he is, he realized he had a bigger purpose for creating videos. Today, we share his powerful story in “Accepting My Blindness” (transcription is below the video).

When I was really little my parents would see me staring at the TV from a really close distance. At first, they thought I was just fascinated by looking at the pixels but little did they know that I couldn’t see well and I would eventually need glasses.

So I did end up getting glasses and yeah they helped out a lot during my grade school, middle school, and high school years. But I still had problems. I still had to sit in the front row and I still had trouble seeing what the teacher wrote on the blackboard or the overhead.

It wasn’t until college when I finally was able to wear contact lenses. It was great, but it lasted for about just nine or so years and that’s because my vision was still getting worse and worse and then they told me “You know what they don’t make contacts that go to your prescription. Your prescription is too high now.” So I eventually went back to wearing glasses.

So fast forward to present day now where I’m making this short film mix sit-down video. This YouTube video where I’m here to tell you hey, uhh, I’m legally blind and I know I’ve mentioned my vision problems in a few videos before but I’ve never really wanted to say that I was legally blind.

Being born with nearsightedness and living with it every day. It’s a real interesting experience actually. Everything is just completely out of focus and only comes into focus when you put something really really close to your eye, but it’s not just nearsightedness. I have problems with my peripheral vision. I drop something and I take maybe 20, 30 seconds to find it and also when I look straight forwards that’s also a problem because I tend to see things a little bit darker than usual and this can be really really problematic when I’m walking around at night.

And here’s the thing I was in denial. I didn’t want to admit that I was legally blind and the reason for that is I could still see quite a bit. I mean I still have trouble seeing with glasses but compared to what other people have. They have more severe vision problems.

I just didn’t feel like I was blind enough to even say that I was legally blind. And here’s another confession. I did not want to be known as the legally blind filmmaker on YouTube and that’s because for some reason I kept thinking that if I focus on that it’s going to take away the attention from my creative stuff to my vision and I didn’t want that to happen.

But after watching a few YouTubers with disabilities it really made me just stop and think why I’m feeling this way about my own disability and why am I so insecure about it? They’ve helped me accept my blindness. They’ve helped me accept it and that it’s a part of me. That is part of who I am. That it’s part of my daily life but at the same time they’ve also taught me that this doesn’t completely define me who I am as a person.

And it’s almost like I’m telling my disability, “Hey, you may be slowing me down but you know what I’m not gonna let you stop me from doing what I want to do.” In a way that’s pretty cool.

What matters to me the most as a filmmaker is trying yo get my stories out there. Trying to get my content out there. Sure it may take me a little longer to set up my camera and edit. It may be more challenging but then again hey life is full of challenges and this is my challenge and I’m willing to accept it and you know what? I’m okay with that.

Hey JC5ers what’s going on? So yeah I wanted to make this video for a while in this format because you’re going to see a few more short films kind of, well…short films mixed in with sit-down videos in this format and I wanted to talk about my vision, my eyesight and that’s going to become a little more prominent on my channel. It’s not going to completely dominate my content but I just want to talk more about it.

It wasn’t just those YouTubers who I watched with disabilities that helped inspire me it was you guys as well, uh. I’m grateful that you guys are watching me and I’m hoping that I continue to entertain you guys and educate you guys here and there as well.

So anyway if you happen to like this video then give it a thumbs up if you found it hey a little bit inspirational for you then feel free to share it if you want. I will see you guys next week or next time hopefully you next week cuz I missed last week’s upload anyway I’ll talk to you later. See ya

Here are a few of our favorite JC5 Production videos:

If you are a fan of creative and authentic storytelling you will want to add JC5 Productions to your playlist.