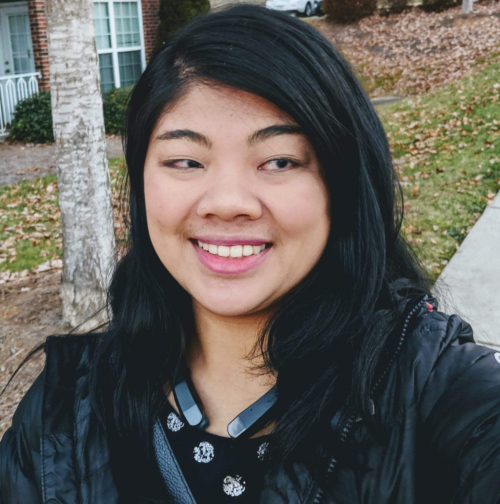 We Can Change – The Power Of Community

“Life has changed me from being fearful and insecure, into now working to help others find themselves and reach for the resources and tools they need to thrive.”

The Struggle of Growing up with a Visual Impairment

Growing up being legally blind with Aniridia was an immense challenge. Aniridia is the lack of an iris and the underdevelopment of the eye. In my case, it also comes with glaucoma, cataracts, , and nystagmus.

I struggled with insecurity, lack of confidence, loneliness, and a general sense of un-belonging. Though surrounded with other family members who were also blind or visually impaired, I felt disjointed from the rest of my peers. As a result, I was never able to fit in despite all my efforts.

I struggled and concealed my depression and hurt with rejection, when people avoided or gossiped about me, and asked things such as “why do your eyes move like that?” or “what’s wrong with her?” Because of microcornea, my eyes appear smaller and nystagmus causes my eyes to constantly and uncontrollably move around.

My defense was to emotionally detach. I was shy and became shyer and there would be days that I didn’t speak to anyone unless forced to by a teacher.

What brought me out into the proverbial light was the help and support I found through community.

Beginning to F Myself

My TVI (teacher for the visually impaired) told my parents about a summer camp for the blind. That camp literally changed my life as I thought I was alone, the only one struggling, but I wasn’t. It was through that program and others, I met fellow peers who shared my struggles. Attending these programs while in high school and transitioning to college taught me so many things. I learned independence, life skills, assistive technology, social skills, and leadership.

What’s more, I saw other people who were blind and visually impaired being successful. I met and interacted with those who were living their dreams and striving toward their goals. This is what I wanted to do; to be like them, to have confidence and show that I was able. To reach past what society said I could and could not do and surpass even my own expectations.

As a teenager, I stumbled and fell, was reckless, and made bad decisions. But life continued and led me to eventually move with my family to North Carolina. It was here I took a job at a company that hired many blind people.

Starting out in manufacturing, I was promoted to being a receptionist. Eventually, I began working at the low vision center that was part of the company. NC is quite different from New Jersey which is where I mostly grew up. In the northeast, people generally mind their own business and didn’t speak to strangers.

Well, North Carolina is the opposite. People would ask how I was, about my life, what I liked to do —all in the first interaction! Oh my, it was such a culture shock, to say the least. Yet, it pried me out of my shell and changed me.

A F of Change

I went from being anti-social to not being able to stop talking. Over time, I gained more confidence and learned how to present myself.

I’ve always loved technology and had a thirst for knowledge. Through my time working at the low vision center, I learned so much. I gained nce in:

Along the way, I met my then to be husband, Pablo; we moved in together, got married, had a son. Due to the high costs of childcare and transportation, I decided to stay home with our son. Becoming a stay at home mom allows me the opportunity to invest in him completely as my father did for me.

With Little Pablo being the first child, it was so exciting learning and enjoying him. This new life, a whole bundle of potential is everything to us. We found out that he has aniridia like me. Though it hurts because we all want the best for our children, he’ll be okay. I know that he will grow up with all the resources and support he will need.

As life went on I grew accustomed to the new way of life with a little one. Settling into my routine, I began to have more time. It was in a moment of looking for something to do besides the day-to-day tasks, I had an idea. I decided to start an organization to share what my husband and I have learned and give others encouragement. Afterall, we all have it within us to continue, to move forward, and to reach for our goals.

I grew up visually impaired, but my husband, Pablo, went from fully sighted to totally blind.  None of us have the same exact stories. We have our own journeys, but we still face similar struggles and we can support and help each other.

I began my youtube channel (Live Accessible) and website (http://liveaccessible.com) on November 1, 2018 and am amazed at the growth we have had.

Our mission through our YT channel and website is to share hope, encouragement, community, resources, tips, and technology to help others who are blind, visually impaired, and sighted supporters. Along the way, I’ve made many friendships, met so many amazing people, and have learned so much from my viewers.

I’m grateful for the opportunity to give back to this community. Together, we can make this world into a better place where we can tear down invisible barriers in society and in this world through raising awareness, mutual support, technology, and creativity.

We can all live .

We Can Change – The Power Of Community Featured Image Description:

Outdoor selfie of Carrie Morales smiling. Carrie’s long black hair frames her pretty face. She is wearing a black leather jacket and a black top embellished with silver accents on the neckline.

4 thoughts on “We Can Change – The Power Of Community”