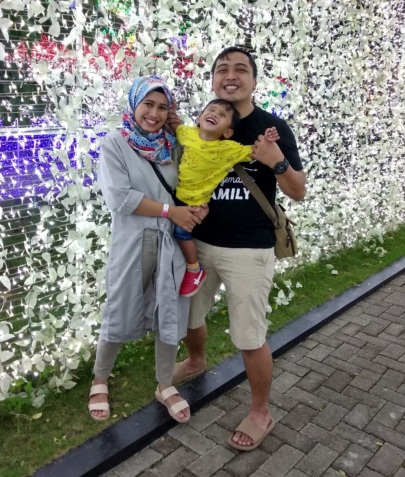 Receiving a devastating diagnosis is never easy. Being a parent of a child who’s the recipient of the diagnosis is especially difficult. As parents, it’s our job to shelter and protect our children from harm. The line between protection and a life without limits becomes blurry when we are raising children with disabilities.

A key component in advocacy (even parenthood) and diminishing fear is knowledge through education. The following lightly edited article was written by the mom of 3-year-old Arthur. She shares his blindness journey and how her and Lingga Arie (Arthur’s dad) are preparing him for a life without limits.  (Here is the Indonesian version of the article)

“Arthur has the opportunity and the right to play, learn, socialize, and move like other children in general. We do not limit it even though conditions are limited. We believe that someday, the work we do for him at this time will make Arthur go beyond its limitations to infinity.”

Hi, my name is Ranny. I come from Yogyakarta, Indonesia. I will share the story of my son named Arthur.

A very long and extraordinary journey when awarded a child who’s born prematurely. Nobody asked, nothing hoped to happen. But whatever power when God wills. Babies born small with low birth weight, only one of the many problems that we found.

Arthur, he is our first child and a boy who was born prematurely. Arthur was born on January 24, 2016, at 30 weeks’ gestation, birth weight was only 1500 grams. He will only be 3 years old and he will spend a lifetime being a person with disabilities because of his premature birth.

Retinopathy of Prematurity (ROP), is one of the risks of prematurity that must be borne for life because blindness is permanent. Yes, he was diagnosed blind when he was 4 months because of the ROP stage 5. In fact, if detected earlier his vision could have been saved.

Not an easy diagnosis that Arthur got. Various types of medical examinations followed. In the beginning, Arthur is suspected of retinoblastoma (cancer of the retina). This diagnosis meant his right eye would be removed and replaced with a prosthetic eye, while the left eye would be treated with chemotherapy.

Luckily, we did not immediately agree with the doctor’s advice. The next day we took Arthur to Jakarta (taking an airplane 1 hour), to get a second opinion. We visited several hospitals, and finally, we met the right doctor, who diagnosed Arthur with ROP stage 5. Arthur’s retina was totally detached―blindness was permanent because of the damage in the retina.

When Options Are Few

The doctor said there was no hope to save Arthur’s eyesight. And the expected outcome from surgery was very small because his retina was completely detached. At that time the doctor gave me a choice:

We took the second choice because our financial condition at that time did not allow bringing Arthur to Japan for eye surgery. Moreover, doctors say the results of surgery can also risk worsening his current vision. So, we better save the money for education and preparation for Arthur’s future. But we are still grateful, Arthur was “only” diagnosed with Retinopathy of Prematurity stage 5, not retinoblastoma which is life-threatening.

Drooping, angry, sad, denial, we have passed all of that. What we are doing right now is to focus on preparing and educating Arthur to be stronger in facing life against the world. Arthur has the opportunity and the right to play, learn, socialize, and move like other children in general. We do not limit it even though conditions are limited. We believe that someday, the work we do for him at this time will make Arthur go beyond its limitations to infinity.

Arthur’s presence became a lesson for us, to be more grateful and interpret this life. We believe that God is never unfair to His people.

See the ability not the disability. Because it’s a time to focus on abilities not disabilities.

In my country Indonesia, it is still far behind other countries regarding facilities for people with disabilities.

Luckily there is a small community accompanied by observers of blind children and also educational consultants from Perkins School for the Blind. We named it the “baby community”. Its members are parents who have blind children. There we learned how to teach our children to be able to be independent and grow well.

We also often learn from other countries’ websites because the source of information in our country is very limited. It is still far behind other countries, especially on how to educate blind children who are still young. In my opinion, the most important thing is educating children at an early age, b it will be a provision in his life in the future.

I hope we can create a world that is friendly to people with disabilities with accessibility, infrastructure, education, health, and social environments. Because the role of the government alone is not enough, but social life in the community must also support the existence of persons with disabilities.

For parents who have children with special needs, whatever the conditions. never give up! Look at how your child is struggling, you must always be with him.

Arthur is laughing with his mom and dad as they pose in front of a multi-colored wall. Both smiling parents are holding Arthur between them with dad stretching out his son’s arms.