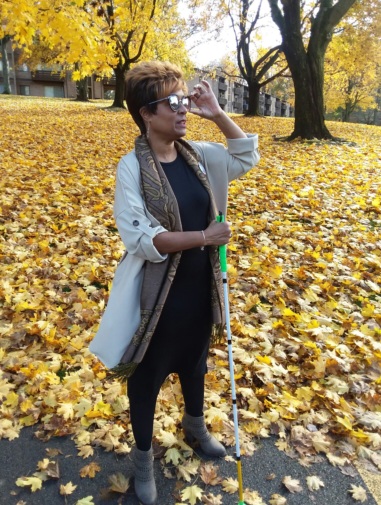 Yesterday: Fixed hair and makeup. Saw no one. Today: Looked like Jack Nicholson from The Shining. Saw all the people I know. ALL. OF. THEM!🙄🤣

Can anyone else relate to the above quote? It’s amazing what a few decades can do to change your perspective. I used to go NOWHERE without my face on. Well, that’s not totally true. One time I went to my mom’s when I wasn’t feeling well. She took one look at me and said: “you should never leave home without your makeup on.” I was not amused.

To give you a little perspective on this mother/daughter exchange my mother ALWAYS puts on her face. Even now at 80 years of age, disabled, and a wheelchair user she still puts on her makeup. It’s the darndest thing that I’ll never understand because honestly, I just don’t have the strength.

My appearance on most days makes Jack Nicholson’s The Shining character look like the sexiest man on the planet in comparison. And you know what? I really don’t give a gosh darn because my dog still loves me as I am.

When The Spanx Fit…

However, every great now and again I feel like I want to look fabulous. Election Day was such a day for me. I weighed myself, lost another pound, and was able to put on my Spanx!!!

Wearing Spanx might not seem like a big deal but for me, this was huge because I’ve gained weight. Case in point, earlier in the year, I wasn’t even able to get this garment past my knees.

So anyway, the magic of Spanx allowed me to squeeze my behind in my LBD (little black dress). This particular LBD is a sleeveless sheath dress that I haven’t worn in years. If that weren’t enough, I was able to get into my black tights. Uh, oh, I was on a roll!

Next, I donned my olive booties, with a beige lightweight jacket and topped it off with a fringed olive scarf. A quick word on the scarf, it’s older than dirt and one of my favorite pieces. The design on it is sort of a paisley pattern with sequins and intricate threading interspersed throughout.

I threw on my pixie cut wig, put on my face, earrings, a bracelet and was ready to hit the polls.

A Chauffeur, Polls & “I Voted”

My son and I got to the polls and wow I’ve never seen a line like the one on Tuesday. Everyone we encountered was so nice and accommodating to a ‘ ole blind lady with her fancy white cane.

After I voted I asked the woman who assisted me if she had an “I voted” sticker. I was devastated when she said, “unfortunately we don’t have any here.” All I could think was, I did my civic duty and now I’m leaving here emptyhanded. Seriously?? Thankfully, she went on to say, “but I heard someone say the library down the road has them.”

So I asked my son aka chauffeur, to take me to the library. Inside I go to the librarian and told her the word on the street is they have “I voted” stickers. She smiled and said, “we have buttons you can make.” Well, I was delighted, that is until my college graduate son couldn’t follow the picture directions 😬 ugh millennials! Thank heavens a sweet older woman helped save the day. After a little chaos ensued (my son still had issues with the button maker) I finally had my shiny new button.

My son took this photo of me outside my condo standing with my green and yellow “white cane.” Actually, the cane is white except for the green handle and the last segment nearest the rolling ball which is yellow. There are a ton of bright yellow/orange Autumn leaves all around me. I’m wearing the black dress, beige lightweight coat, olive paisley print oblong scarf around my neck and my “I Voted” button pinned to the scarf.