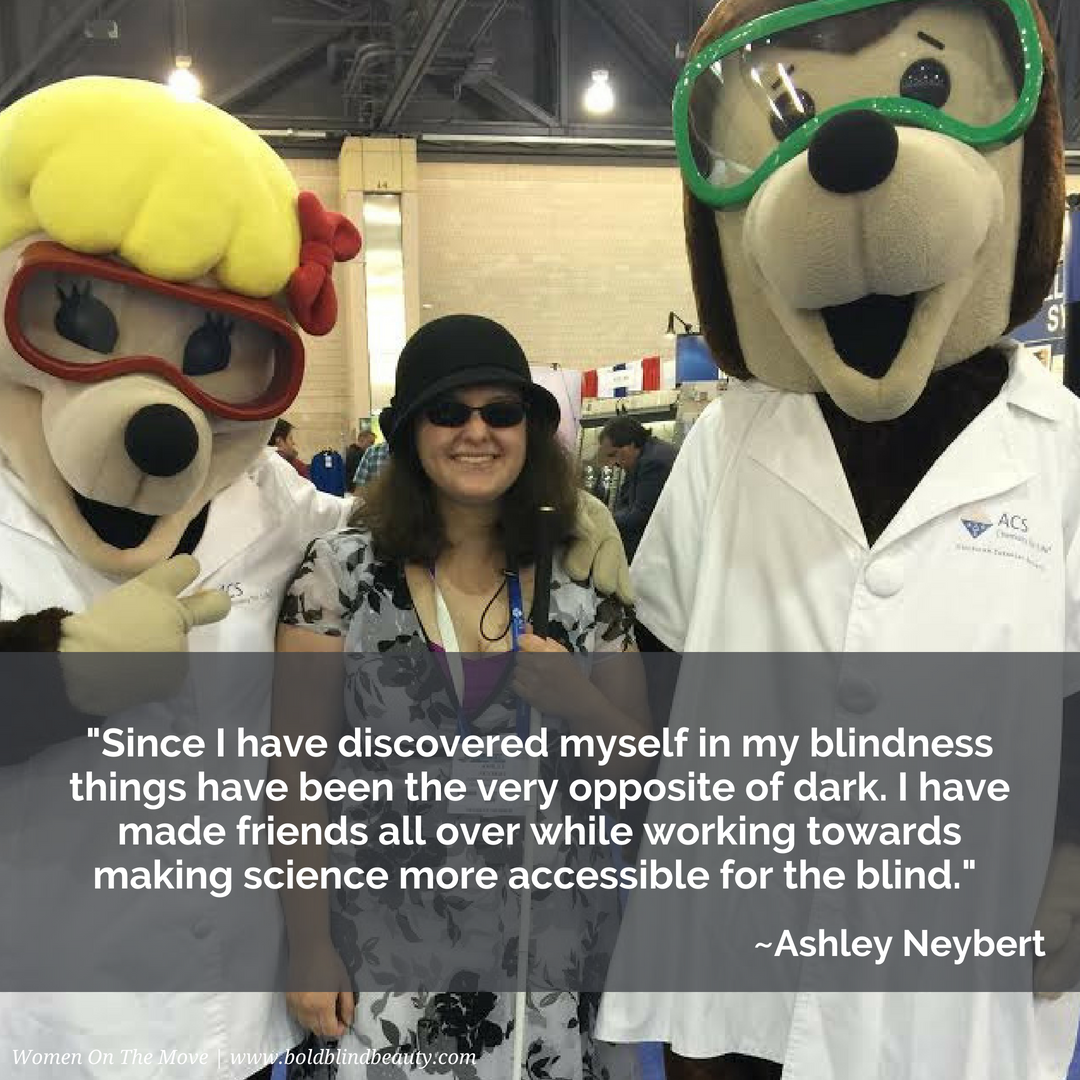 “Since I have discovered myself in my blindness things have been the very opposite of dark. I have made friends all over while working towards making science more accessible for the blind.” ~Ashley Neybert

Women On The Move | Ashley Neybert

When I was little I had nystagmus and amblyopia. I wore thick “coke bottle” glasses but my family never referred to me as blind. As a result, I would run into a wall, look confused, and potentially hit the same wall again. I just “couldn’t see well.” At least that’s what the adults whispered. This, as they quietly debated the likely cuteness factor of a toddler with big glasses running into walls.

At around 4 years old I had eye surgery that supposedly fixed my problems. Sure, I periodically had to wear eye patches while reading or playing a computer game. This was more pleasant as my grandmother made me beautiful fabric ones to wear, but it hurt though. I never liked this because trying to read like that always hurt and I was so sleepy afterward. However, my parents said this would help so I could maybe someday do things like driving or getting a job.

The eye patching was only supposed to last so long. My sight was supposed to stabilize and become permanent but it never did. I went to an eye specialist who said it was a long shot as patching was usually effective up to age 8. But, in my case, as long as it still seemed to help that was good. Apparently, my brain was special so it became a typical cycle:

Eventually, the longer I did this cycle, the shorter it became between times I’d have to wear eye patches again. Then the light sensitivity I had started increasing as well after my surgery.

Pretty soon I was wearing sunglasses and hats most of the time and having to use patches pretty often. By this time, I was in college and studying to be a chemist. The sunglasses caused some issues with goggles as everything polarized and I lived in a world full of rainbows. I learned ways of coping with a portfolio of colored papers to put behind things. I’d shuffle through them until I found the perfect one for that experiment but it was slow and ineffective.

My advisor suggested I talk to Dr. Cary Supalo, a blind chemist, to learn adaptations to help me become more effective. I learned some non-visual techniques which greatly helped my productivity.

Over time, after my transfer to Rockhurst University in Kansas City, Missouri I relied more on non-visual techniques. Everything looked strange to me. I noticed more issues until I ended up walking straight into the family car because I didn’t see it. At this point, for lack of better words, it hit me: I was going blind.

I started walking with a long white cane and learning braille. Then I joined the National Federation of the Blind and for the first time, it didn’t matter how much or little vision I had. There was no need to pretend I could see more than I could. I was accepted even though my doctors didn’t know what was going on.

An Answer And A Way Forward

Eventually, we learned I had a cortical visual impairment. My doctor’s best guess was that when my eyes were physically fixed my brain didn’t fully get the message. Because of this, it was as if I never had surgery and my original conditions were left to progress. Despite this, I graduated with my Chemistry degree, then went to the Colorado Center for the Blind to learn more blindness skills. I am currently in graduate school working towards a PhD in Chemistry Education.

Since I have discovered myself in my blindness things have been the very opposite of dark. While working towards making science more accessible for the blind, I have made friends all over. In an effort to help others find confidence in themselves regardless of their situation, I have had the opportunity to do speaking engagements. I am also striving to do research to help the blind make their mark in science. In working towards my goals no matter what I have never been one to back down. I may do things differently, but as it turns out, different is not so bad.

Ashley wears a cute black and white floral dress with a black cloche hat, sunglasses, and black ballet flats proudly holding her white cane. She is standing between two mole animals dressed as Chemists wearing lab coats and goggles. A pun on the Chemistry unit mols.

The photo of Ashley is in boldblindbeauty.com’s WOTM template. The entire template contains the photo and a transparent gray overlay with the quote in white text is near the bottom.

Categories: B3 Magazine, Women On The Move
Tag: Ashley Neybert