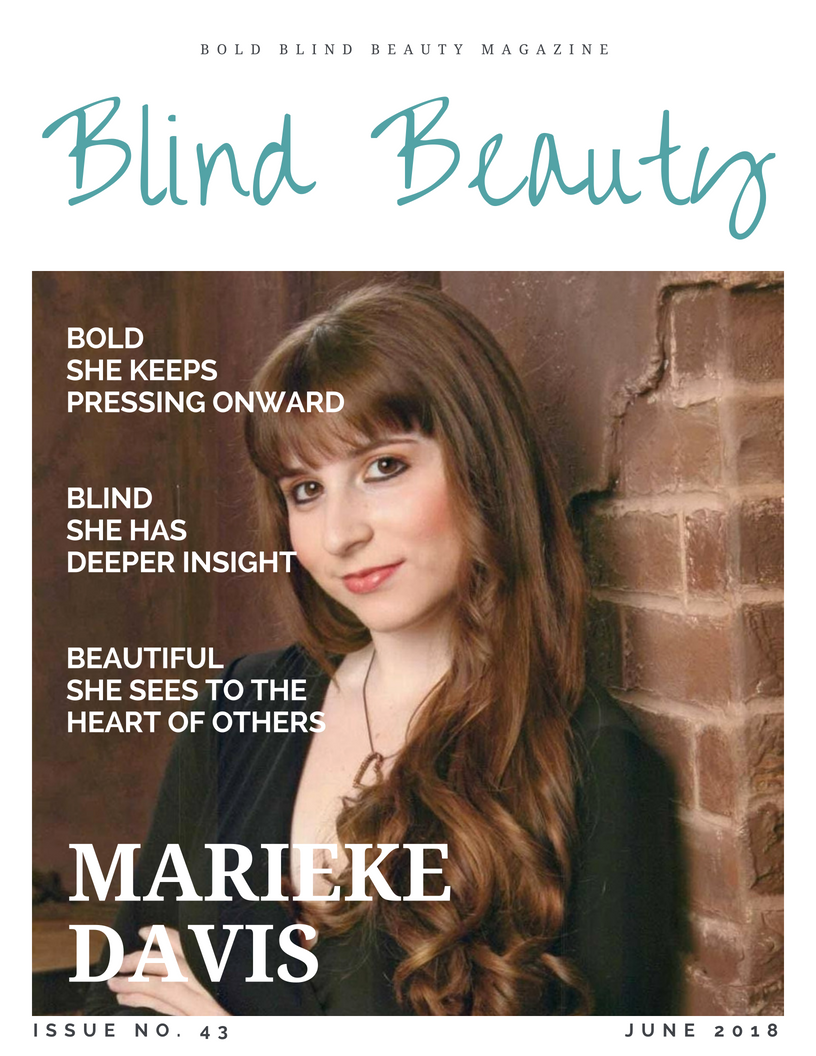 Diagnosed with a massive brain tumor (pilocytic astrocytoma) at age ten, Marieke underwent three surgeries and 15 months of chemotherapy in the course of ten years. Although she has been intervention-free since her last surgery in 2011, she is permanently visually impaired with hemianopsia (half her field of vision in both eyes), and so uses a white cane to compensate for her lack of right-side vision.

In the Bachelor of Fine Arts (BFA) program, Marieke experimented with various artistic techniques and mediums—emulating classic art masterpieces, such as depicting herself in the manner of Gustav Klimt’s “Portrait of Adele” and imitating Alphonse Mucha’s Art Deco style in her “Women of the Apocalypse” series, dabbling in intermedia, as shown in her objet d’art piece, “Sight of Hand,” in which she ironically decorated her first white cane with plastic “googly eyes” and attached a decorated plaster hand at the end of the cane to illustrate to the fully sighted that the feel of a white cane enhances sight for the visually impaired/blind, and creating unique jewelry—while almost setting her bangs on fire in the process!

Ultimately, her artistic exploration led to her most comfortable means of artistic expression in graphic literature and comics. It was while she was teaching herself how to create the Prologue and first chapter for her series, Ember Black, that her ASU Disability Resources liaison revealed to her that her daughter is also a visual artist; however since she is completely blind, she has never been able to see her work. That got Marieke determined to provide an audio companion to her graphic series, in an effort to extend her visual art to the visually impaired. The audio version—complete with voice actors, sound effects, and music—along with the printed graphic version earned her the Audience Choice Award in the First Annual ASU Herberger IDEA Showcase, and she is currently working on Chapter 2 of Ember Black, thanks to a grant from the Arizona Commission on the Arts.

Concurrently, Marieke publishes “Life is Blurry,” an autobiographic, online comic strip created from the perspective of a “visually impaired visual artist”—such as she is—with the purpose of educating the able-bodied world through the most effective means she knows: humor. The strip was inspired by Alison Bechdel’s graphic autobiography, “Fun Home,” and was developed in her Women’s Studies course, “Chronicling Women’s Lives.” Excerpts from the strip earned Marieke a 2017 Kennedy Center for the Performing Arts VSA Emerging Young Artist award, and her entry is currently on a national tour. Eventually, Marieke would like to compile her comics into a complete graphic autobiography, but in the short-term, she hopes to have “Life is Blurry” become a nationally syndicated comic strip. Just as people of color strive for artistic representation, people with disabilities want to be represented in the arts, particularly in popular culture.

The image is a faux fashion magazine cover titled Blind Beauty. Marieke is on the cover looking stunning in her black wrap dress. She has long brown hair cascading over her left shoulder and her bangs frame her pretty face.

Blocks of text superimposed on the photo are: “Bold | She Keeps Pressing Onward,” “Blind | She Has Deeper Insight,” “Beautiful | She Sees To The Heart Of Others”