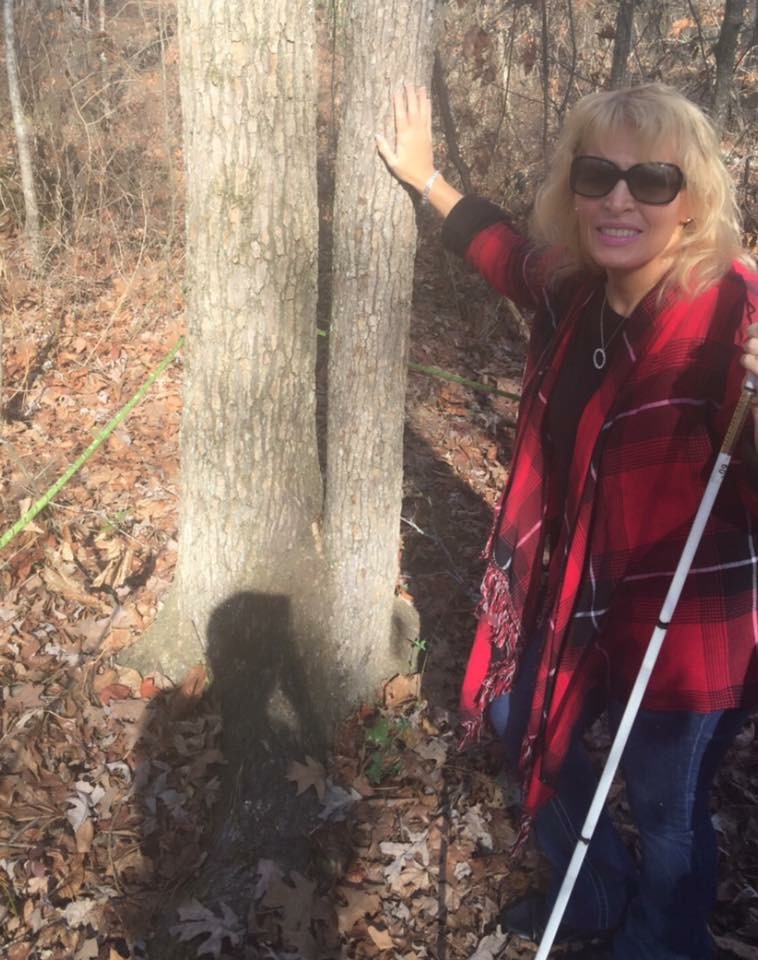 “Like most blind people, I found getting a job a struggle and even wondered if I had wasted my time.” ~Christina Holtzclaw

Christina Holtzclaw is a wife, mom, and Assistant Director at the Center for Independent Living. She has also shared other words of wisdom here on Bold Blind Beauty in Blind Beauty Issue #3 and Eyesight, Judgement & Independence.

Born almost blind, I learned to navigate the foothills of the Appalachian Mountains at an early age. Wading in the streams, hiking, fishing, and picking strawberries and honeysuckles has always been part of my life.

I was the first blind child to enter the public school system after the Rehabilitation Act passed. This act granted children with disabilities access to public schools. With very little assistive technology available at the time, I began Braille and typing when I was 6 years old.

Attending the blind school nearly 150 miles away from my family was a possibility if I couldn’t keep up with my sighted peers. I recall being told this before Christmas in my 1st-grade year. I vividly remember facing it with such innocence and naïvety. My focus was on Santa coming and bringing my new doll and in a month, I would turn seven years old.

I didn’t realize I was blind because I had always been treated the same as my sighted brother and sister. My school years were a rollercoaster of trial and error as the schools tried to create a space for me. I did not have other blind children in my life, so I learned about Country Singer Ronnie Milsap at our county fair when I was seven years old. He is my friend to this day and is credited with much of my success.

When I graduated high school, I won scholarships to attend a private college where I earned a Bachelor Of Science degree in Psychology. I also got my first guide dog named Chloe who lived with me in the dorms until I graduated.

Like most blind people, I found getting a job a struggle and even wondered if I had wasted my time. I finally took a job at a sheltered workshop for a while and later obtained a customer service job. During this time, I got married and had four children, 3 sons, and 1 daughter.

Being a blind mother has been an adventure. Often, people find it easy to want to interfere using blindness as an excuse although I’ve supported my family and have been a loving mother.

In 2004, I was contacted by the Center For Independent Living (CIL) to help open a new center. I was excited to build the center from the ground up and have been with CIL for 14 years now.

As the assistant director, I love my job and being able to help others. I have learned so much from the people with disabilities that I have the honor of knowing. The position I’m blessed with has helped me grow, learn, and face my blindness as I help others.

My vision took a turn for the worse in 2010 when I got glaucoma. The glaucoma pressure was uncontrolled and after surgeries and many medications, I lost my remaining eyesight in October of 2016. One of the most difficult things about losing my vision for me has been not seeing my family and friends. But, I have learned over the years, that I can still see them in different ways.

I have my guide dog, Felicia, now and am constantly adjusting and trying new technology. My goal is to continue to assist people with disabilities on a local, state, and national level. I work with the Council and Federation of Georgia, the FCC panel, NCIL committees and serve on various transportation groups to promote access for people with disabilities. I always hope to pave a better way for those with disabilities who come behind me. The one thing I’m determined is to never allow blindness to stop me.

In the featured image, Christina is posing in a wooded area with her right hand against a tree. She is holding her white cane in her left hand and wearing blue jeans with a black top. Sporting oversized sunglasses, she smiles for the camera while cloaked in a red, black and white flyaway jacket.

The photo included with the post, is a close up of Christina flashing her megawatt smile. Her blond falls over her left shoulder while her bangs frame her face. Christina is wearing a dark brown and tan-colored print top with a dark brown beaded necklace.